The aht [EP]: Martina Nehrling meets The Sea and Cake

A little about the inspiration behind the aht [EP]:

While preparing for interviews I'll often hear a song, now where I don't necessarily consider myself a synaesthete but my brain goes there from time to time while looking at the art of others. The aht [EP] is where you'll find musical comparisons to the work of a previous interview guest. So please keep an ear out for the occasional appearance of these musical posts on this blog.

Here is the first of the series: Martina Nehrling meets The Sea and Cake.

Below we have a piece by previous guest, Martina Nehrling based in Chicago. Several works by Martina appear to be related to almost anything aquatic for me, so naturally my brain pulled up the instrumentation side of a song called "The Leaf" by The Sea and Cake (also based in Chicago). I couldn't have planned that better myself. Could this whole thing reflect a certain pulse of the creative community found there? Not sure but it makes for a good reason to point that out.

"The Leaf" opens, with what sounds like, the bubbling up of marimbas being played together, and with a bit of a phaser effect perhaps? This speaks to the overlapping/layering and kinetic weaving of the strokes in Martina's painting below...both the song and the paint create the form and structure of what I see and hear. Also, a good part of the song features similar sounds, along with the drums holding things up just a bit ever so complimentary, even the breathy vocals echo that fashion. Then a transition to light electric guitar(s) skillfully loosen up the song's framework to close...all while the drums get a bit more familiar to the ears.

Below you'll find Martina's painting and the audio for "The Leaf." I hope you'll enjoy these two artforms side by side. 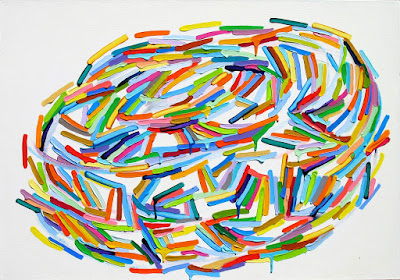 The Man Operating the Tilt-a-whirl was in Love With Rose, 28H x 36L in., acrylic on canvas, 2012 by Martina Nehrling


The Leaf by The Sea and Cake:

And the previously released audio interview on the blog can be found here: Martina Nehrling interview.

Thanks for looking and listening.

Posted by Phillip J. Mellen at 1:32 AM No comments: